On Friday 15th March 2019 I presented the collaborative aspect of my research at the 2019 NAFAE conference, Living Research: The Urgency of the Arts, held at the Royal College of Art, Battersea.

The introductory text to the conference asks:

“What does arts and the humanities research have to offer in our current socio-political climate? This conference for research students takes as its focus the ways arts research methods and practices might be put to use in our contemporary moment. We ask, what ‘work’ can a PhD do? By this we do not mean how might our research be instrumentalised or applied, but rather how it might lead our interactions with, and understanding of, the world.”

The conference was divided into six themed sessions: Collaboration, Documents, Entanglement, Environment, Me and Reenactment. As my collaboration with neuroscientists at the Centre for Neuroimaging Sciences at King’s College has formed a significant part of my research, I applied to be part of the Collaboration session and was scheduled to be the first of six presenters.

Pdf files of the full conference programme and conference booklet can be downloaded from the NAFAE website, but the pages relevant to my own presentation are shown below. 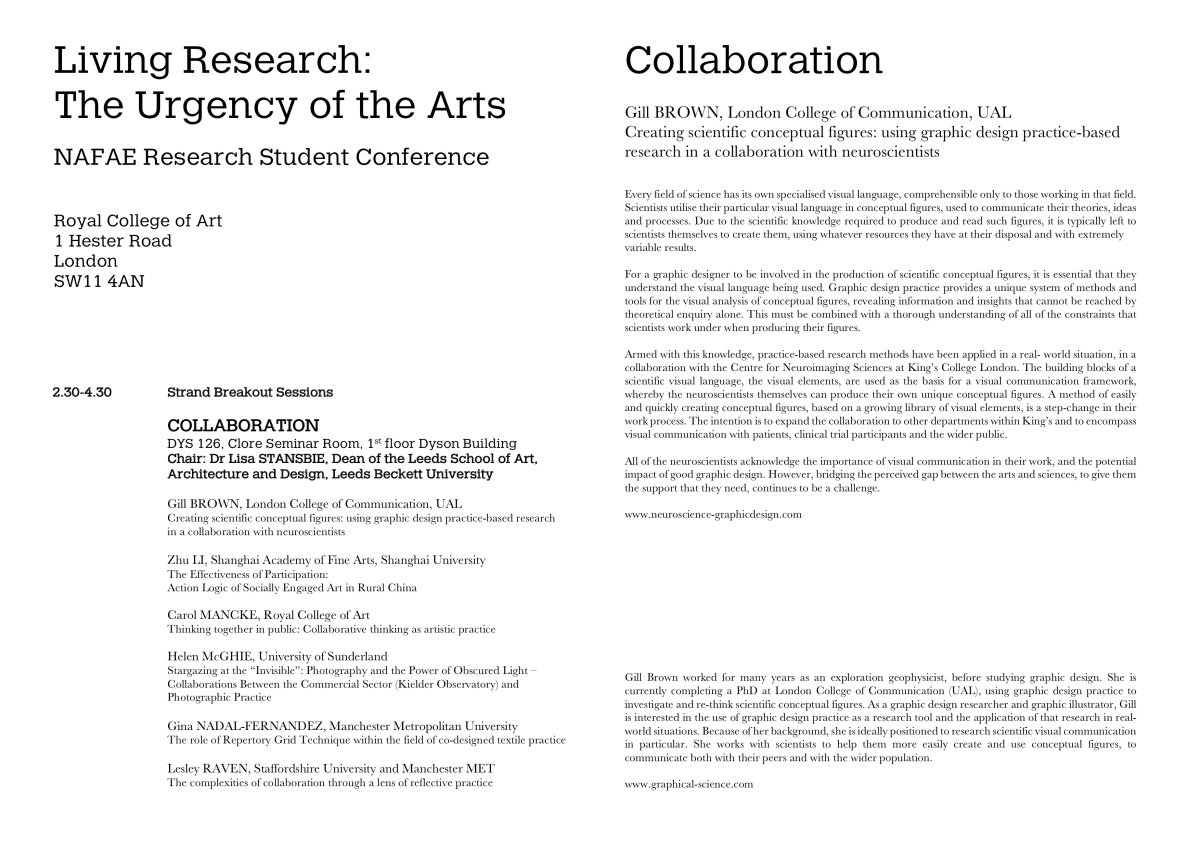 With only 15 minutes available, the presentation was very much focused on my collaborative work and was divided into 4 sections:

Showing a typical example of a scientific conceptual figure and explaining how scientists create them, with every scientist adopting their own approach. Lack of resources – time / money / specialist software / training – results in a huge variation in the figures, in terms of both their visual appearance and their quality.

Collaborating with the Centre for Neuroimaging Sciences

The neuroscientists were actively looking to collaborate with a graphic designer, preferably one with a science background. They face a range of issues when creating their conceptual figures and this blog post on the collaboration website details most of them. In the presentation I highlighted what I see as the main issue – that conceptual figures use highly specialised visual languages and often contain a lot of complex information.

Consequently, if a graphic designer is to actively help, they must learn the particular visual language being used. My approach is to take example conceptual figures, re-draw them, identify the visual elements and discuss with the neuroscientists what each element represents. This process is documented in many blog posts on the collaboration website and a portfolio of re-drawn visual elements is included on this website.

Once I understood the visual language, I could create versions of the visual elements that were adaptable enough for the neuroscientists to use to create their own conceptual figures. There are several blog posts that explain this process – for a methods figure and a process figure, for example – and a portfolio of adaptable anatomical visual elements is included on this website. The image gallery on the collaboration website shows the images that are available for the neuroscientists to use and, for the more adventurous, Adobe Illustrator files are also available that they can edit for themselves.

Bridging the divide between the arts and sciences

Or the, ” … gulf of mutual incomprehension”, as C.P. Snow termed it, in his Two Cultures lecture of 1959*. As my research is situated in the middle of this gulf, it has proven difficult to ensure that both sides understand my research and what I am trying to achieve. In particular, my research is mistaken for a science / art project, most often by those on the ‘arts’ side of the divide.

Professor Roger Kneebone, an orthopaedic surgeon and director of an engagement and performance science programme at Imperial College, makes that point that this programme “… is not a conceptual science-art collaboration, whose benefits for science are often considered marginal. It hinges instead on physical communication at the level of doing and making – the craft of science.”** Kneebone invites craftspeople, such as embroiderers and lace-makers, to work with surgeons as they sew and handle threads, and puppeteers to work with surgeons undertaking surgery with remotely operated instruments. He sees the common link that “… we discover through doing in science and craft.”

While not saying that graphic design is a craft, I think that by encouraging the neuroscientists to use the visual elements to build up their own figures in Adobe Illustrator, they are engaging in ‘knowing through doing’ and, in at least one case – described in this blog post – a neuroscientist found that creating her figure made her better understand the scientific processes that she was visually representing.

The value of graphic design to scientific visual communication

in general, scientists do appreciate the impact of good graphic design on their work. It is particularly important for those working in healthcare, when they are visually communicating with their patients or with those participating in clinical trials.

For a graphic designer to be able to actively help scientist with their visual communication they must:

My own aim, as a graphic designer collaborating with scientists, is to put a framework in place to help scientists create their own conceptual figures – and in the process they may even gain new insights into the science they are visually communicating.

Following the presentation, there was a short time available for questions and discussion. One question was how, as a graphic designer, to gain the confidence of a scientific community, so that they are willing to work with you. I had to admit that my science background really helped here, as I already understood a lot of the issues that the neuroscientists face. But I worked as a geophysicist, and I knew very little about neuroscience and the visual language that is employed in that field. So I had to learn that language, in the same way as a graphic designer without scientific experience would have to. Understanding the language is key to being able to actively collaborate with the scientists, rather than just sitting on the sidelines, pressing buttons on a Mac.

Two audience members picked up on the fact that one of the neuroscientists found that creating her figure helped her better understand the science, seeing that as an important point. One of these was Finn Strivens, a biochemistry graduate currently undertaking an MA in Global Innovation Design at the RCA. Speaking to Finn after the session, he is interested in design that actively helps scientists in their work, but was struggling to find many examples of this. He saw this aspect of my collaboration with the CNS as potentially achieving this.

Up until now, I had not really emphasised this in my thesis, but I am beginning to see that this could be a starting point for further research – creating a graphic design framework that fits in with the scientific method of doing and thinking. Utilising that framework could then help the scientist better understand their science. I will be revising my thesis writing to reflect this.